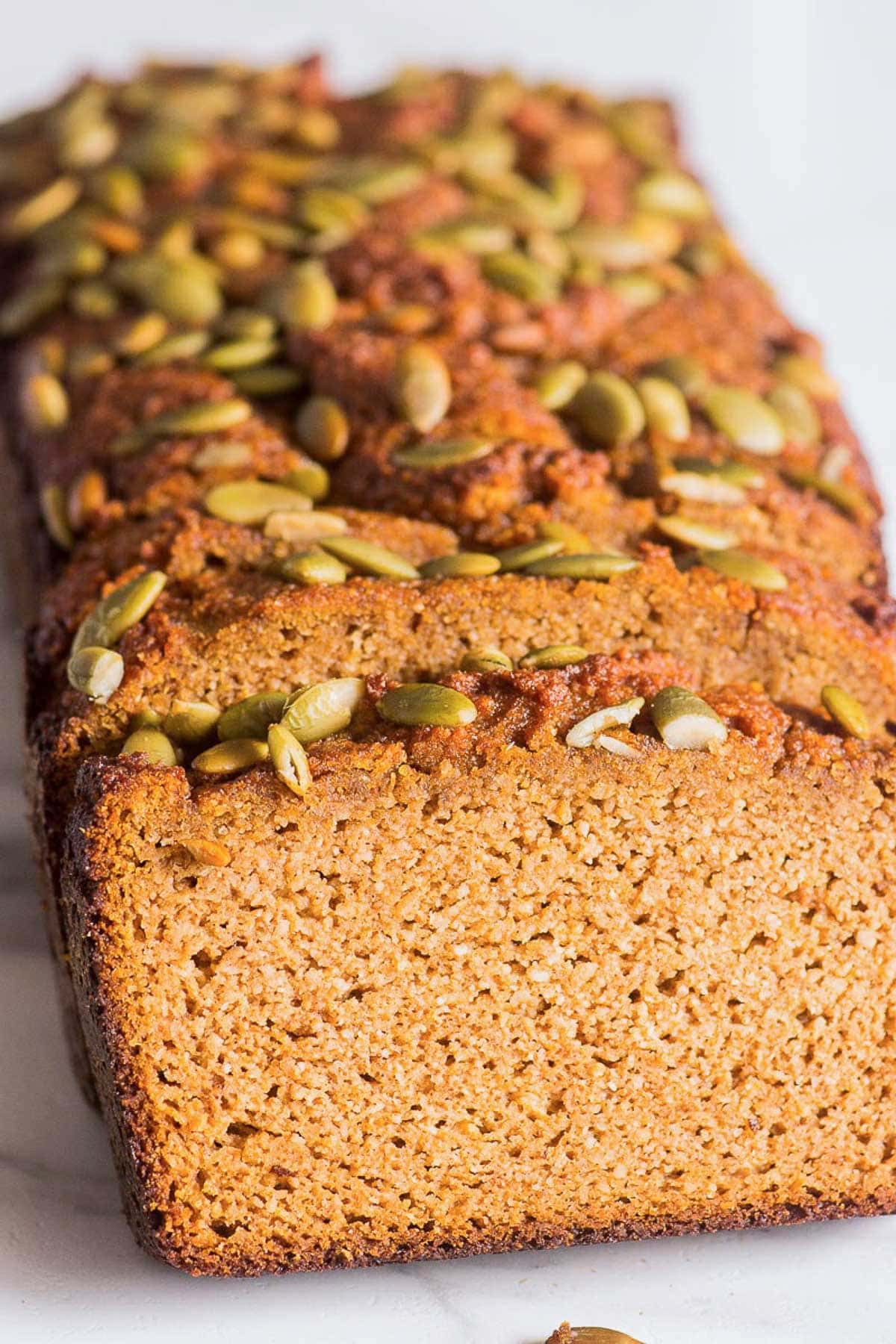 When the fall weather hits, warming spices and seasonal produce are a must in this kitchen. So along with cozy apple bread (and muffins!) and pumpkin muffins, cookies, and brownies – I’m also whipping up batches of this gluten-free almond flour pumpkin bread! With a combination of pumpkin pie spice topped up with extra cinnamon, this fall-fantastic bake will fill your kitchen with warming fall spices and the ultimate ‘cozy vibes.’

Plus, by swapping out regular flour, this almond flour bread with pumpkin puree (fresh or canned) is amazingly moist and tender. Not to mention that the almond flour also helps to create a nourishing gluten-free pumpkin bread packed with protein, healthy fats, and fiber! Even more so with optional add-ins like nuts, seeds, dried fruit, or even chocolate (antioxidants, please!).

When you’re not too busy stuffing pumpkin into every bake possible, you might also enjoy using it in warm and comforting dinners like parmesan pumpkin spinach quinoa, pumpkin soup, or one-pot pumpkin taco pasta! 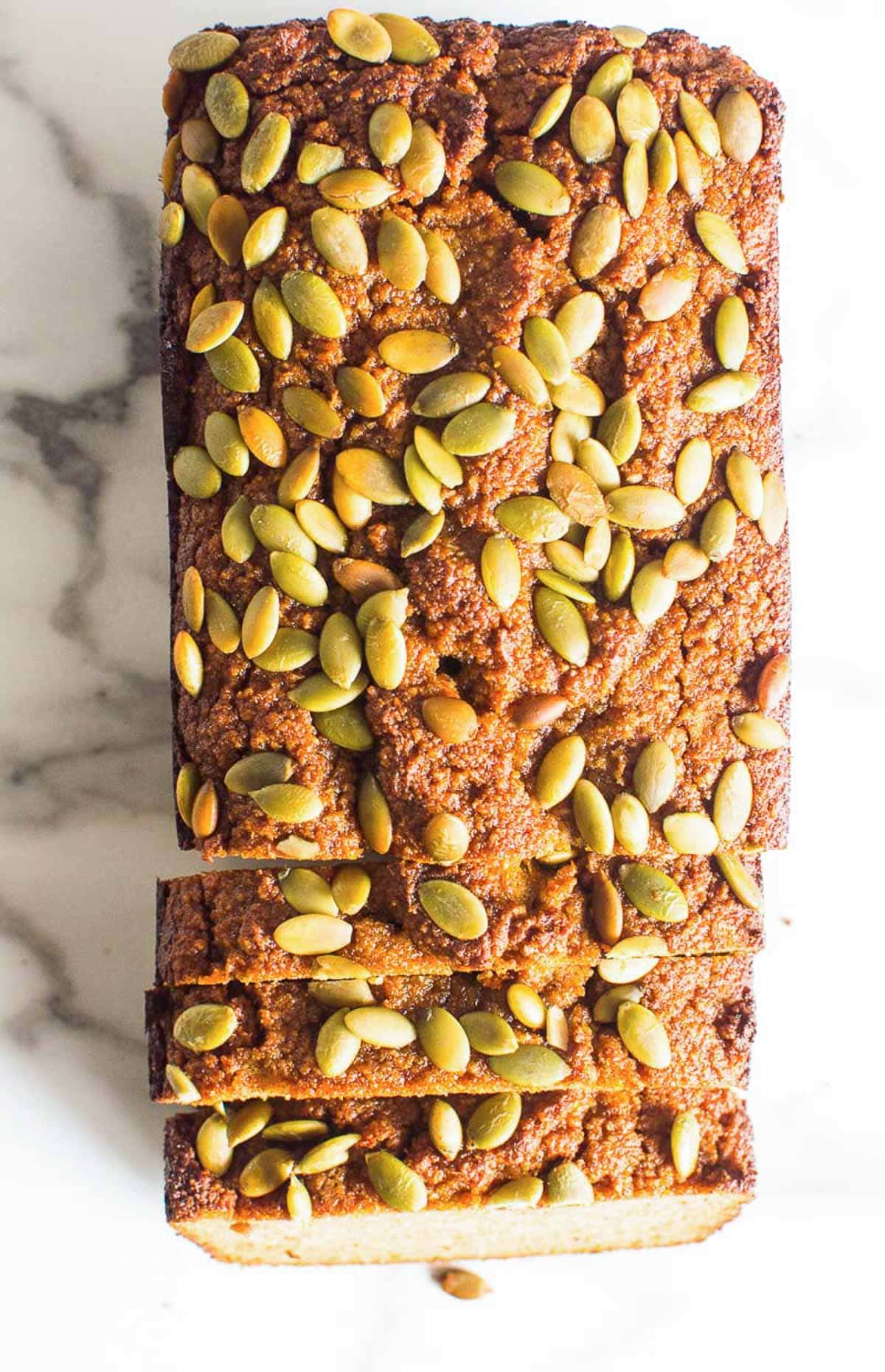 This recipe was specifically designed with almond flour in mind. However, if you want to use regular flour (like all-purpose or spelt flour), check out this recipe for healthy pumpkin bread or chocolate chip pumpkin bread.

If you use an alternative sweetener, make sure to adjust the amount accordingly. For example, reduce the amount to 1/3 cup when using erythritol, as it’s naturally sweeter.

You’ll also need a little cooking spray (I use Misto) for the loaf tin. 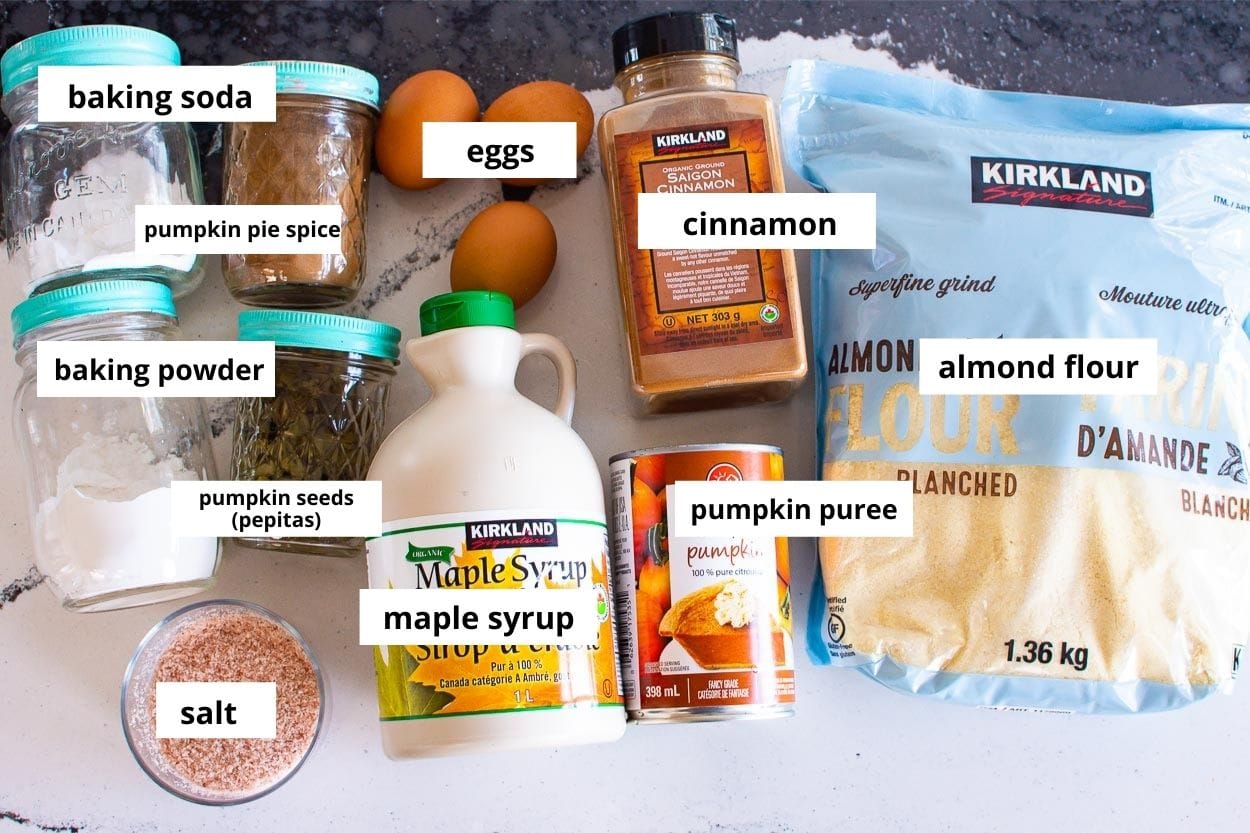 I used a light pan, and it took 50 minutes. However, when using a dark pan, it will cook faster. So, I recommend checking on it at 40 minutes.

I recommend using around 1 cup of ‘fillings’ in total from the options below.

Absolutely- divide the batter into a lined muffin tray and then reduce the baking time (20-30 minutes should be enough). Likewise, I’d probably check at the 12–15-minute mark for mini muffins and test with a toothpick until ready. Alternatively, check out these pumpkin muffins!

How do I make this gluten-free pumpkin bread egg-free?

I haven’t tried this recipe with an egg alternative, so I can’t guarantee any results. However, readers have had luck subbing other almond flour recipes with chia or flaxseed eggs. Though, with almond flour, your bake will usually be flatter and denser.

How does almond flour affect bread?

When using almond flour in quick breads, not only will the bake be wonderfully moist and tender (thanks to the natural heart-healthy fats), but they’re also naturally gluten-free. While technically denser than regular AP flour, when combined with the right ingredients and leavening agents, you can make wonderfully light and fluffy almond flour bread – that doesn’t even taste like they use almonds! Like this lemon zucchini almond flour bread, almond flour carrot cake, or almond flour brownies!

There are 16g Net carbs per portion in this almond flour pumpkin bread recipe, as written. However, the maple syrup alone contains 70g+ of carbs in this recipe. You can remove 7-8g net carbs per portion by swapping the sweetener for a low-carb alternative.

Following on from the above – as the recipe is written, it isn’t technically keto due to the high carbs. However, a low-carb sweetener could have a single slice at around 7-9g net carbs, and the remaining ingredients are all keto-friendly. 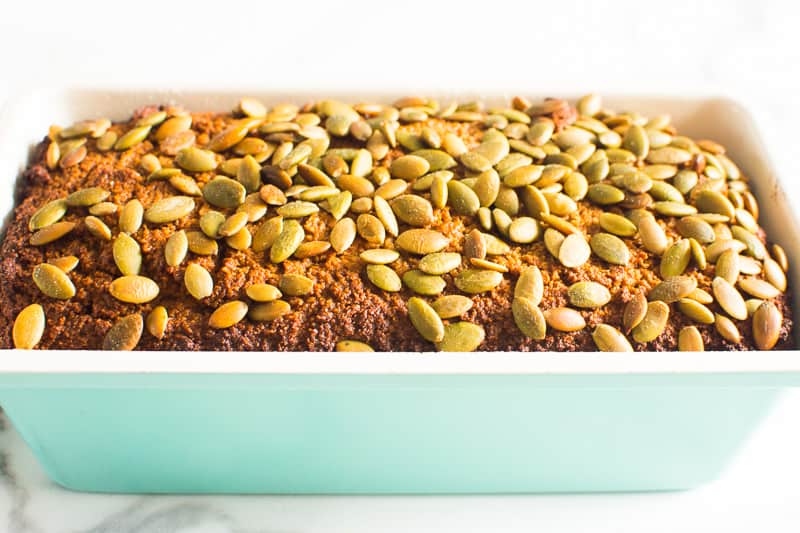 You can also enjoy the leftovers in fun ways, including turning them into French toast or even reheated in a skillet with a bit of butter for a more decadent, toasty treat!

Make ahead: You can prepare the batter (minus the leavening agents) a day in advance. Store it, covered, in the fridge. When you’re ready to bake, fold in the leavening agents and bake as usual. You may need an extra minute or two in the oven for the chilled batter.

Storing: Store the pumpkin almond bread covered in a cool, dry location for up to 5 days (or in the fridge for around a week). Make sure to keep it covered, so it doesn’t dry out.

Freeze: Place the slices separated on a baking tray and freeze until solid. Then transfer to a Ziplock bag and freeze for up to three months. When you want a slice, allow it to thaw on the countertop.

Reheat: You can enjoy slices of the almond flour pumpkin spice bread warm by using a toaster oven or the microwave (in 15-20 second increments). If you want to heat a large amount, you could loosely wrap it in foil and reheat it in the oven at 400F/205C until warm (around 10-12 minutes). 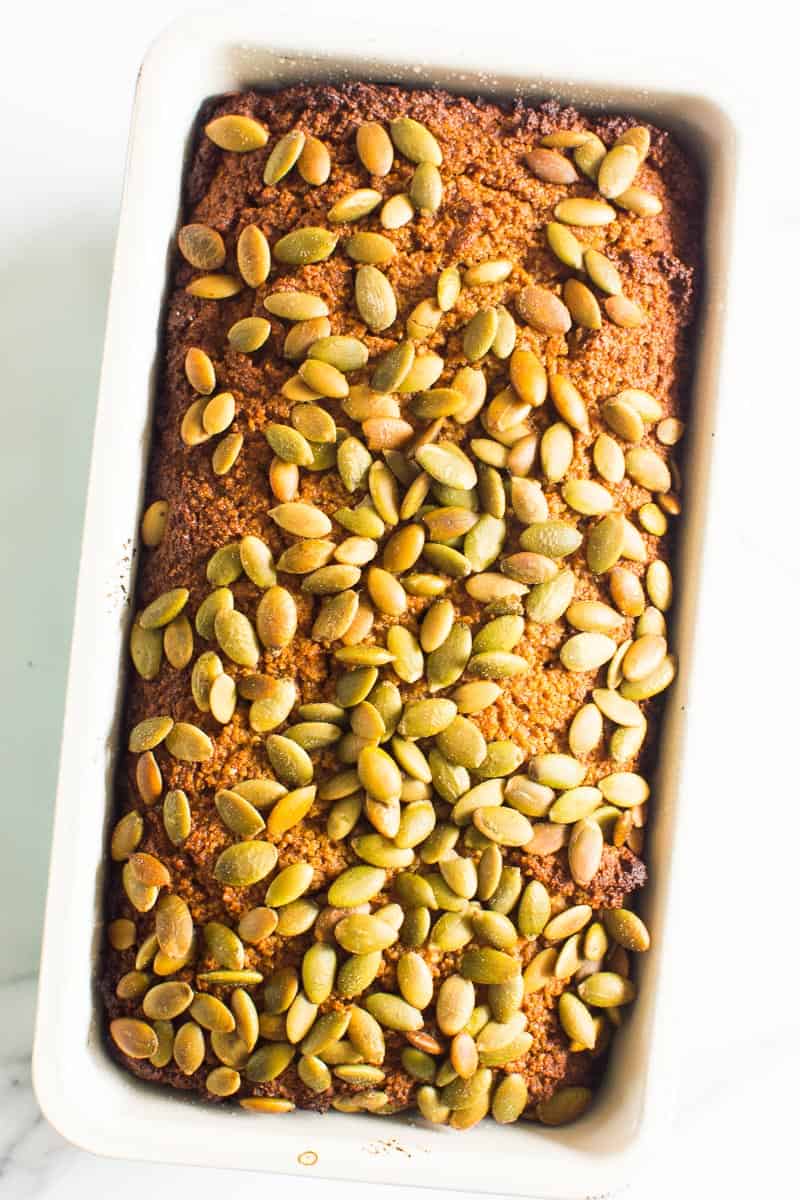 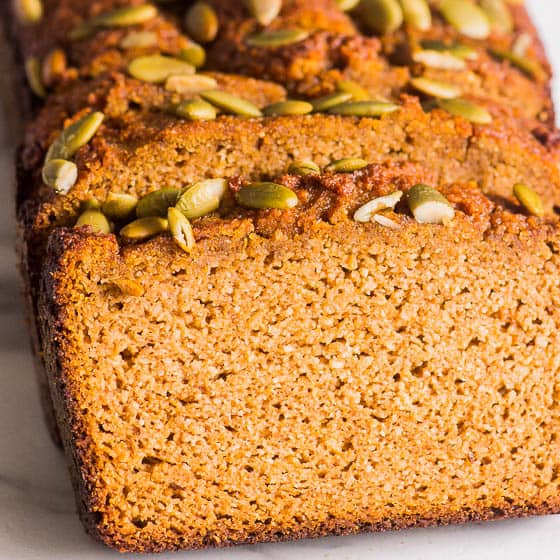 Make Ahead: You can prepare the batter (minus the leavening agents) a day in advance. Store covered, in the fridge. When you're ready to bake, fold in the leavening agents and bake as usual. You may need an extra minute or two in the oven for the chilled batter.

Store: Store covered in a cool dry place for up to 5 days. Freeze in an airtight container for up to 3 months. Alvin Zhou Takes Us Behind The Scenes Of ‘Snoop & Martha’s...